Starting at the beginning is usually best. Vittorio Traverso was born in Pentema, Torriglia, Genova, Liguria, Italy on 15 March 1866. Pentema is a very small village perched upon a mountainside located near the Swiss border with the sea coast on one side and mountains on the other. According to his certificate of death, his father's first name was Giacomo. (Father's death in Italy 1897 | See church and plaque to right)

Luisa Bacigalupi, born on 26 July 1875, immigrated in 1890 by herself from Carasco, Genova, Liguria, Italy to live with a sister on Greenwich Street in San Francisco.

Read more about the "Great Arrival" of Italians to America.

Vittorio met Luisa and four years later, 1 April 1894, they were married. Vittorio was 6'3" tall and Luisa was 5' tall. A year later they had William (29 Mar 1895). Luisa may have been a seamstress and Vittorio was working in a grocery.


Vittorio found he could make better money as a miner at the Great Western Quicksilver Mine in Middletown, Lake County ($3 a day) so he moved his family there. (Read lower portion of note from B. T. Rocca.) Their second son, Victor, was born there (16 January 1898). Besides working in the mine, they grew vegetables and sold them to the resorts.

They saved their money and around the turn of the century (1900) they returned to San Francisco. On 9 February 1901, Vittorio purchased 491 Greenwich at Dupont for the sum of ten dollars in gold coin. (First Deed)

John, their third son, was born 5 February 1902 in San Francisco. On 15 April of that year, Vittorio became a naturalized United States citizen. The record was lost during the Quake of 1906 and his naturalization was reestablished on 5 January 1909 in the San Francisco Superior Court by Judge Thomas Graham. This Voter Registration page includes Vittorio. Note his address is at 439 Greenwich. 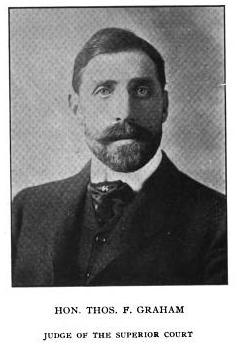 Page 233 from the PACIFIC TELEPHONE AND TELEGRAPH CO. SAN FRANCISCO TELEPHONE DIRECTORY JUNE 1902. It lists Traverso V. Groceries at 439 Greenwich with DAVIS 641 as the phone number. The research is continuing to try to understand why Vittorio bought the grocery at 491 Greenwich, but Vic worked in a grocery at 439 Greenwich according to the San Francisco City Directories.

"For most of its 150-year history, Telegraph Hill was a working-class neighborhood, and it remained unapologetically so until the 1930s. Early photographs of the Hill show a neighborhood of trash-strewn steep dirt and gravel streets (often little more than paths) with goats grazing on the unbuilt portions. The streets were lined with small false-front or gable-roofed Italianate-style cottages, with the occasional multi-story balconied dwelling. These worker's homes were built on the Hill because steep grades kept land prices affordable and because the Hill was close to the piers and warehouses of the Northeastern waterfront where many of these workers had jobs. Rickety wooden stairs linked the top of the Hill with that waterfront. Longshoremen, in particular, had an advantage living on Telegraph Hill because they could keep an eye out for incoming ships, allowing them to make it to the 'shape-up' at the piers before the arrival of other would-be job-seekers."(Telegraph Hill, September 2002 by Christopher P. Verplanck)

More about Great Western Mine

"Between 1875 and 1900 the Great Western Quicksilver Mine Company, located on the border of Sonoma and Lake Counties, became the most important mercury producing mine in California. At its peak, the mine shipped between 27,000 and 31,500 tons of mercury per year to be used in gold mining operations. Located some 45 miles outside Calistoga, the mine transported the quicksilver by horse-drawn wagon over rough mountain roads, which sometimes took an entire week of rough travel to reach Calistoga. There, it was shipped by rail to San Francisco." http://www.knightsbridgewinery.com/history/#

A Memorial and Biographical History of Northern California, page 148.

"Residence number 17 is the boarding house at the Great Western Mine, under the charge of Mary Driscoll, brought in from Shasta County for that role by mine superintendent Andrew Rocca, her husband, Timothy, her nephew Michael, who serves as waiter, and cook Charley Denver. Guests include Andrew Rocca, his new wife Mary Ruby; the teacher who replaced her, R. D. Reed; and eight mine workers." http://middletownhistory.weebly.com/middletown-1890.html

Click on GoogleBooks link to view in larger format.


April 18, 1906 was the day of the earthquake. The hotel was completely destroyed. So, Vittorio took his wife and three boys and moved them to a ranch in Pleasanton, which he had just leased to grow grapes to make wine for the hotel.

After the family was settled, he returned to San Francisco to rebuild his hotel. He financed the reconstruction by borrowing money from friends, without signed notes, and paid every single one back! When the hotel was rebuilt, he moved his family back into two rooms of the hotel. Vittorio was the bartender, goodwill and PR man; Luisa was cook for 22 boarders and sometimes fed as many as 250 at one seating. The three boys worked as waiters, busboys, and bartenders.

In July, 1906, Vittorio was granted a liquor license from the City of San Francisco. There was a listing of those receiving licenses in the The San Francisco Call on Tuesday, July 31, 1906. 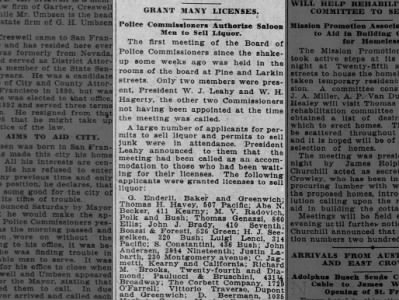 In 1908, the saloon on the corner was converted into a grocery store by Vittorio. (Second Deed in name of V. Traverso) The 1910 US Census includes 25 boarders. In early 1933, the hotel was remodeled into apartments and were owned by the Traverso's until sold in 1977.

Vittorio and Lusia retired and lived next door at 1654 Grant Avenue which Vittorio purchased November 17, 1909.

Vittorio became ill with pleurisy in 1925. He smoked 20 to 30 cigars a day. He died December 7, 1933. Luisa moved to an apartment at 487 Greenwich Street. She died December 20, 1937. Both (Vittorio | Luisa) were buried at Cypress Lawn Memorial Cemetery in Colma, just south of San Francisco. (Red dot indicates building of burials.)

2006-2019 © Rainbow Stores Web Site | An Historical Accounting of the First San Francisco Grocery Co-op
Site Designed/Maintained by Papillon.site
Owner: Lou Thompson, Grand-daughter, John Traverso
Email Webmaster | lou.thompson@sbcglobal.net
All rights reserved. No part of this website may be reproduced or otherwise used without the express written consent of the site owner.